How authors can win with critique groups

It’s hard to know how much help a critique group can be until you see its authors in action. You’ll get more help from a group with a few authors who have published. If you’re lucky, it’s traditional publishing at any level (small press and un-agented counts) or even self-published (using editorial rounds from an editor like me.) If nobody in the group has even posted a blog entry, that’s a warning signal.

It’s not easy to find a relevant group of fellow writers, and so a good editor can do much of that work. You’ll pay for that analysis, but there’s an upside: you’re not committing to doing a lot of analysis to provide on another debut author's work.

Everybody needs an outside set of eyes, regardless of skill.

I ran a monthly manuscript group with novelists and another with memoirists. For more than 11 years, I critiqued a lot of manuscript pages. Using Amherst Writers & Artists training, I'd started my critiquing with handwriting in the margins, plus a memo. Eventually, my annotations got so explicit that I had to shift to commenting in Word. Any good response to a disconnect in writing is best delivered right next to the problem.

Then there’s the matter of clarity. You achieve clarity by making your writing compact. Frank Conroy, who ran the Iowa Writer’s Workshop for decades, wrote about clarity in his memoir Dogs Bark, but the Caravan Rolls On. It’s about the only place that Conroy wrote about the Workshop's practices. About clarity, he says, “The reader expects the writer to have removed all excess language, to have distilled things to their essences — whether the style is simple or complex. If the writer has not done this work [of clarity], the reader is less enthusiastic about putting energy into reading the text, less sure of being on common ground.”

Conroy describes writing as a pyramid of skills. Meaning, sense, and clarity are the bedrock of the pyramid. Until a writer achieves these, then things like voice, tone, and mood are likely to fail. Metaphor is three levels higher than the bedrock. (We all love to use metaphor, don’t we? Have a look at my video to see how.) 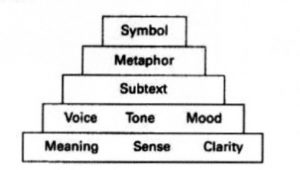 Nonfiction presses us into fewer places to fail in a narrative, because we’re describing events that happened to people who exist in the known world. However, memoir steps closer to the aims of a nove than other nonfiction, because it needs to evoke more emotion. Memoir is what we nonfiction writers gravitate toward when we find a “story that must be told.” Sometimes it’s called narrative nonfiction — the name is a matter of how much realism resides in the writing. Tone is more important in memoir, for some authors.

If you focus on the tone of the writing, the attitude of it, you've got to do that by assuring readers about the bedrock of meaning, sense, and clarity. These three things might be in there, in your estimation. The context is always your head, though. Not theirs, at least not with the kind of reading that’s easy to get from a critique group. Your context may not yet be clear enough for your group.

Without their express understanding of how stories succeed, you can just file away criticisms from a group's members under the heading of opinions. They may not be connecting closely, and good writing turns the writer’s intention into the reader’s experience. A critique group member might say, “I’m just not feeling it,” and when they say that, every author gets less well served. The specific comments on what doesn’t work for them really help you. It’s always up to you to agree or disagree. That's true whether it's an editor or a group.

Sometimes we join groups to get our writing into the world in a limited way, so it seems more real and closer to publication.  So affirmation is a fine thing, even if it’s only, “Well, I read your chapters.” However, learning what to try next requires specifics. Nonfiction skills may not prepare us for memoir as well as we’d believe. We get pretty good at making clarity as a regular result of pages sent to groups, though. Outside readers give us a checkup on that.

Photo by Jonathan Chng on Unsplash