How to give readers a break with chapters 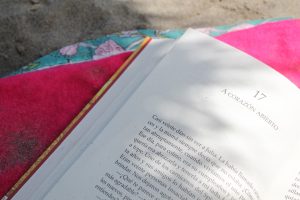 Photo by Justine Camacho on Unsplash

"I like big chapters, long ones," said just about nobody who reads books. Readers need rests, like the rest stops on a 100-mile century bike ride. I did one of those rides a couple of times. Never ride the century, we'd say. Just ride to the next rest stop.

Books can be centuries, with historical fiction running above 100,000 words and even more. Unless you’ve got extraordinary break points within a chapter, though, readers need rest.  Locations shift, and times of the week, month, or year advance. Even a POV shift or just a focus on a new character’s activities calls up chapter possibilities.

Creating chapter breaks gives your skills of transition a way to shine. When a reader picks a book back up, they can restart easiest at the chapter break. Good, obvious section breaks will do the same kind of job.

The biggest chapters I ever read in a book were All The King’s Men by Robert Penn Warren, the Pulitzer Prize winner. I got to the end of each of them (maybe 10 in all, for a 80,000-word book) gasping for a break. You're always going to want to make 20,000 words represent four chapters of a book. It serves a story well to break it into episodes. If not, let's hear your reasons for leaving it as one chunk.

As to what’s inside that chunk, it’s more of a matter of how well does the material serve the main mission of the main character. We need color and context. Making choices is important, I and I like a willingness to cut things out. Just because something is interesting doesn’t automatically win it a place in the finished story. As a novelist, you can make me trust you when you cut something out and make the leap. “Two weeks later, she had different ideas about that.” Just skip over time, for example.

I’m reminded of the line in the movie Wonder Boys about the main character, award-winning novelist Grady Tripp. He’s had a real problem finishing his second book. One of his students discovers the 2,600-page manuscript draft and reads it (somehow). She says, “Professor, you taught us that making art means making choices. And with the details in here, the geneology of the horses of the characters, for example — it doesn’t look like you’ve made any choices.”

I hate making choices and need outside eyes to help. We all do. Grady Tripp never had anybody read his book while he made it. Then a windstorm boiled up and threw all of his pages into a riverside breeze. He had to start over. Wonder Boys is a great book and a great movie. Make your book great and find the points where the story can rest. Not everybody has time to binge.